split on silence - on

Could you please ask the progranning  staff to add the following enhance_ents to the _usic program  (wow the "_" worked!!)

as reel to reels

You have a silence level of 11.75.  That is very high.  Reset your settings to the defaults and try again.

1.  I don't know what your asking.  The attached screen looks as it should

2.  You use the tab key to move between fields on a windows machine, not the arrow key which is used when in a field.

3.  The scissors icon is a manual split, not an edit.  The program does not support editing.  There are plenty of editing programs out there.

4.  Pause and switching off recording are the same thing arnt they?  Or are you saying you want to a pause and not close the current file and then some time later unpause and have sound go into the same file?  Im not sure under what circumstances you would want a music recorder to do that?

Don't forget this is a music recorder, not a general audio recorder.  It has been specifically designed for capturing music and tagging it in the simplest manner possible.

Let me know how you go once you have reset your settings.

signal would be captured prior to it reaching that particular device

think it will but will let you know

1. Thats not how it works. Audio is recorded directly from the app not the sound system so the volume is not relevant.

2. I can use my arrow keys here on the 4 numerical fields. Perhaps you need to get a new keyboard given the m issue as well :)

4.  You reboot your computer?  There is no signal - the sound is being taken directly from the app.  Please provide your debug logs if you can not record from an app. Also make sure it is in Settings > Recordings Settings and click the App button. 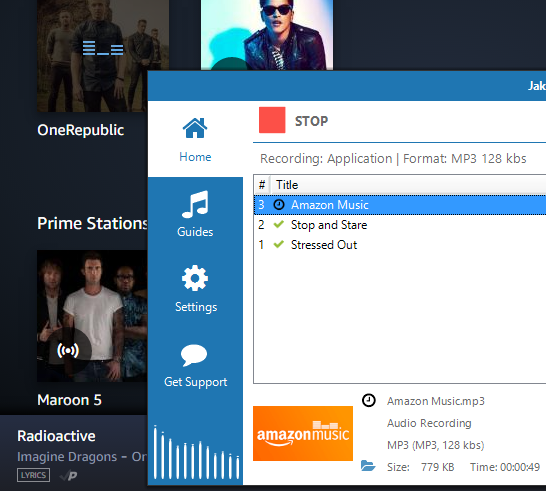 AM USING AMAZON VIA INTERNET EXPLORER

That would be correct as the file name is "Jaksta Media Recorder 6.mp3" which is the default name if you have the Settings > Naming Rules > Use application title as initial title off.  Therefore the thumbnail will be different than a recording from the Amazon app when that is on as the file name will be "Amazon.mp3".  Once that tagging happens at the end (provided it is one of the 30 mill+ tracks we have fingerprints for) the thumbnail will change based on the track, artist, album etc that is found.