When Jaksta Media Rcorder 7 is installed on Windows 10 version 2004 (build 19041.450), the Windows Defender>Device  security>Core isolation>Memory integrity feature gets turned off. When attempting to turn this on it fails and I am asked to resolve driver incompatibilities. There are 2 offending driver 1) jaksta_va.sys - Jaksta Technologies and 2) jaksta_va.sys - e2eSoft.

Can you help please? is there a way of resolving this issue? I would appreciate your assistance.

Both of these drivers appeared when Jaksta Media Recorder was installed and the Windows 10 was a completely clean rebuild from downloaded from Microsoft! At the moment I have no idea how I can remove either of these.

This is a screen shot of the identified drivers 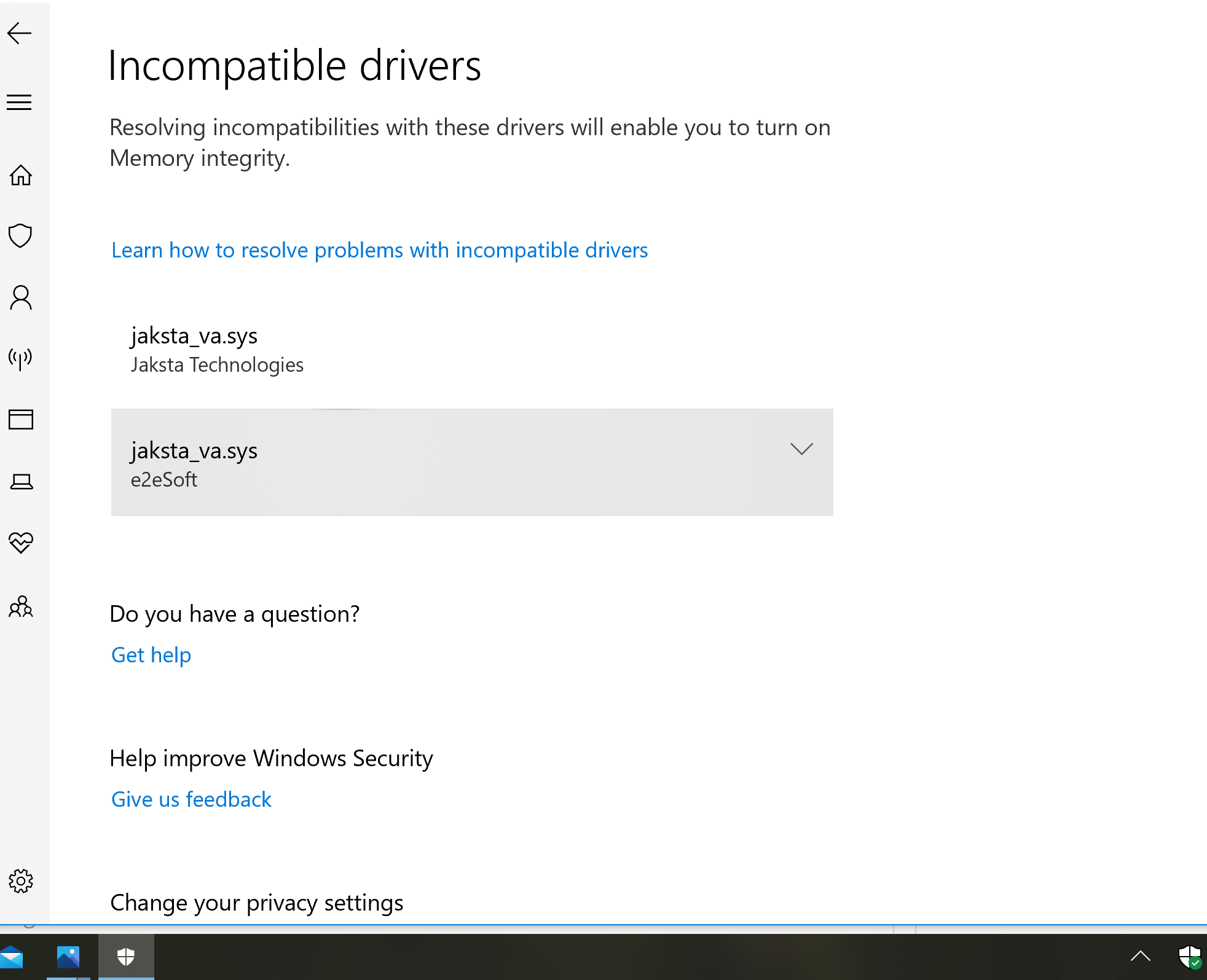 And the following 4 screen shots where I did a search from  C:  for jaksta_va.sys and there were 4 results, each attached shot shows the details for one of these files.

Since adding the previous screen shots I have done a little experiment on a different laptop, a Dell Inspiron 15 that I use for testing.

1) I did a completely clean install of windows 10 from the latest media download from Microsoft.

3) When it came back up I again checked the Memory Isolation feature was switched on. I then downloaded the latest version of Jaksta Media Recorder  (7.0.21.0) from the Jaksta site and installed it on the newly built Inspiron 15. I did not activate the Media Recorder as I only have one license but that does not effect this test.

4) I then checked the Memory Integrity feature of the core isolation and it showed that it was switched on ... no problem (apparently). I then turned the feature off and it tells me to reboot the machine. When the system came back up I went back into Core Isolation>memory isolation and attempted to turn it back on, however it failed to turn on and asked me to check for driver incompatibilities which I did and it found the SAME TWO DRIVER incompatibilities as on my main DELL XPS 13 laptop, the subject of this support request.

As this was a new Windows Build with nothing else installed on the machine, both these drivers MUST have been installed by the Jaksta Media Recorders installation script.

OK, I now believe there is only one jaksta_va.sys driver not two as originally thought. It is part of the Digital Video Recorder device. The driver details are:-

Ok I see what the issue is - the virtual sound card used by the DVR feature is not marked as compatible with the latest Windows 10 builds.  It is though and works fine on 100k's computers.  I will mark it as compatible in the next version.

Note that Microsoft has only just turned this "feature" on by default and is recommending to leave it off if it is causing problems.

Thank you, I look forward to the next version of Jaksta Media Recorder.

Sorry forgot to reply. Have been unable to get the recording features of this driver to work, when this new windows feature is on. They are incompatible currently.  If you really want to have it on, then you won't be able to have JMR installed or you will have to uninstall the driver manually.  This driver is used by JMR's DVR capture.  If you want to uninstall it Device Manager > Sound, video and game controllers > Digital Video Recorder.

Thanks for your reply, it was not what I wanted to hear but thanks all the same.